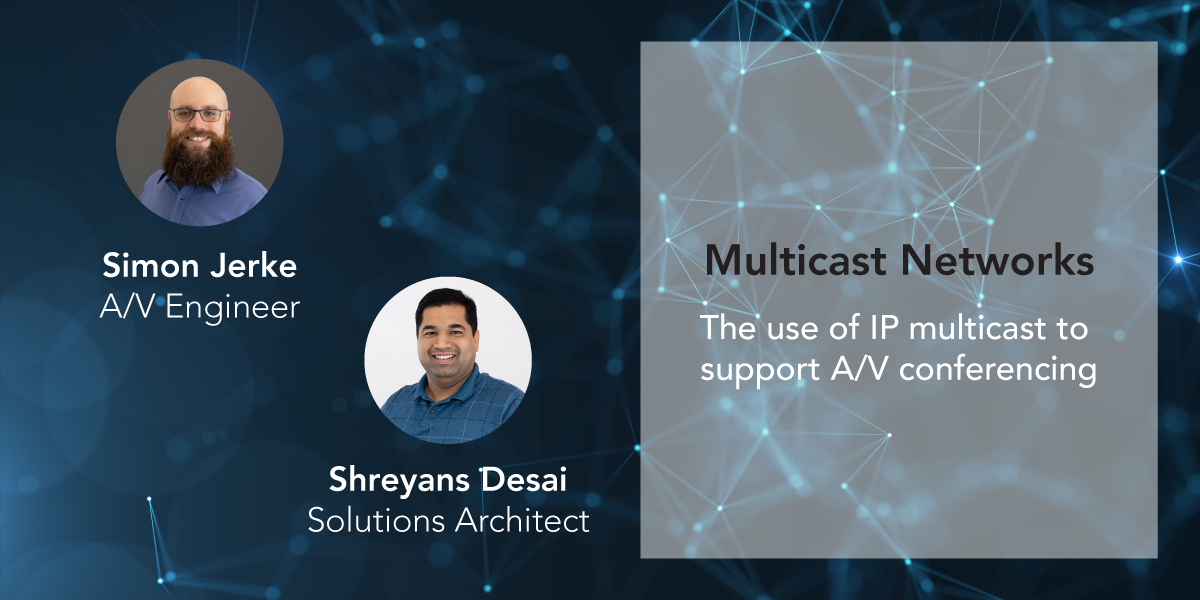 We’ve been talking about some of the networking issues that can impact A/V systems. First, we took a look at some of the issues that can arise when A/V requirements aren’t considered while designing the network. Next, we explained the importance of the Audio Video Bridging (AVB) standard in successful A/V deployments. In this post we will discuss the use of IP multicast to support audio and video conferencing and other use cases.

IP networks are designed for unicast transmissions, which means that a device transmits data to one recipient. With multicast, a device streams data to a group of designated recipients, while broadcast involves the transmission of data from one device to all the devices on a subnetwork.

Multicast is valuable for A/V because it reduces server loads and redundant network traffic. This helps to increase efficiency and performance. It’s important to remember, however, that UDP packets still traveling over the IP network, which provides only “best effort” delivery. Jitter, latency, packet loss and other issues should be expected, so the network must be designed to maximize reliability and Quality of Service (QoS).

The Internet Group Management Protocol (IGMP) is used to establish membership in a multicast group. A device will send an IGMP “report” to tell a multicast router (known as a “querier”) that it would like to be part of the group and receive multicast transmissions. If it no longer wants to be a member it sends a “leave” notice. The querier transmits group membership queries at regular intervals, receives reports and keeps the group membership list up to date. It also forwards any multicast data it receives to networks specified in the membership list.

When designing a multicast network, a key consideration is whether the querier will be located in the core, aggregation or access layer. Placing it in the network core can be challenging, particularly in highly virtualized environments with domains that encompass numerous switch and router ports. For that reason, it often makes sense to put the querier in the access layer. If multicast is mission-critical, multiple devices should be deployed for redundancy.

Next comes the configuration of the querier, a process that’s complicated by the fact that there are three versions of IGMP. Each version has unique characteristics, and the choice depends on the operating system and A/V applications it needs to support. Also, the uplinks that receive multicast streams must be sized properly to handle the traffic. There are rules of thumb to help determine whether a 10G, 40G or even larger switch is appropriate.

Multicast isn’t right for every A/V application. Many organizations will need to use broadcast to push A/V streams from headquarters to branch locations for “state of the union” presentations from the CEO, training required for all employees, and similar use cases. Still, multicast is a useful tool for A/V networks, enabling audio and video conferencing, large content transmissions and downloads, and other applications with high bandwidth and performance requirements.

Shreyans Desai is a Solutions Architect at Rahi Systems, on the Networking PSE team. Prior to Rahi Systems, he was a Solutions Engineer focusing on networking automation and systems. His experience includes enterprise data centre and service provider routing, switching, and security solutions for multiple vendors (Juniper Networks, Cisco, Palo Alto Networks, Arista, and Huawei), and also has a deep understanding of cloud computing solutions from Amazon Web Services (AWS) and OpenStack.