A Day in the Life… of an Irish Engineer 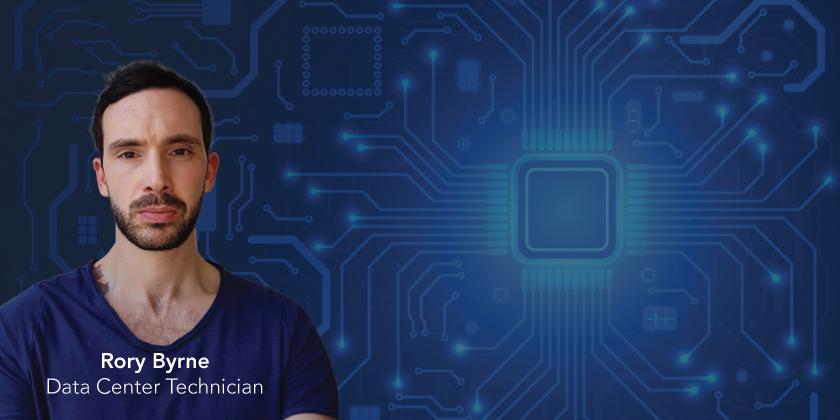 A passion for computers from an early age and an inquisitive mind that pondered the workings of machines inspired Rory Byrne’s career choice. Rory, who is from Dublin, Ireland, is a Data Center Engineer with Rahi Systems.

Headquartered in Fremont, California, Rahi Systems has offices in more than 25 locations across the world. Just four years ago, the company expanded into Europe where it has a rapidly expanding team of more than 60 people.

Before joining Rahi, Rory ran his own well-established IT repair company for four years in Ireland and enjoyed continuously developing his knowledge working with technology. Then in 2015, he “took a chance to pursue something different.”

Rory’s decision to pursue a career in the data center industry was driven in part by the rapidly growing data center landscape in Ireland.  A 2018 report by Host in Ireland, a leading European industry body, revealed that the emerging data center sector in Ireland has contributed €7.13bn to the economy in the last 10 years.

Now, as a highly-skilled, hands-on engineer Rory provides a variety of services for Rahi to keep computer systems and networks operating successfully. It is a job that comes with a variety of responsibilities that can vary vastly from day-to-day.

Working as a Lead Data Center Engineer for Rahi, Rory finds research and continuous lifelong learning to be of vital importance in keeping up-to-date with new and existing technology in the data center industry.

According to Engineers Ireland, there has been a 10 percent increase in demand for Level 8 engineering courses in the university applications since 2018. This is due to the demand and necessity for engineers in Ireland, which is of course partly a result of the country’s growing data center industry.

Like all engineers, he excels with the more “hands-on” activities such as troubleshooting, isolation testing, and networking which are part of ”rack and stack” projects.

The future of the Data Center industry in Ireland and across Europe is on the rise and it will make significant contributions to the Irish economy as the country acts as a central hub for data centers. Host in Ireland revealed that investment in data centers has reached beyond €1.3bn and that the ongoing investment in the data center sector up to 2023 will be in excess of €11bn.

What inspired your decision to become an engineer?

When I was 12, I took apart our computer at home and that’s how I began to love computers, phones and anything gadget-related. I took it upon myself to learn what I now know and figure out how stuff works!

What are the essential skills an engineer must have?

A certain unity of skills is required to work in the data center industry, ranging from leadership, communication and management skills to the obvious — a technical and inquisitive mind.

What does a typical day for a data center engineer look like?

There are a variety of different responsibilities that I am accountable for on a daily basis, including traveling abroad and working on a variety of projects. Going to work as a technician, you may have to attend a site and it could be related to anything from support, to rack and stack, decommissioning or equipment moves. Another day, it might simply involve running diagnostics on servers to detect faults.

Some days I’m involved in stress testing the hardware to try to make hardware fail, exposing any hidden faults or predicted failures. Then if required I might perform upgrades to hardware and software on servers.

I also have to deploy new hardware where it goes into production, which means data and live traffic is running on the servers. There really is a vast range of areas to work on depending on what is needed by our customers at that time.

It’s extremely important to keep up to speed with new products and procedures in order to be acquainted with the current and future market.

What is your favourite part of your role with Rahi Systems?

I enjoy all the various aspects of my job but particularly the projects that involve building! My favourite projects are ‘rack and stack’ builds, as well as troubleshooting, isolation test, and networking. One of my favourite projects with Rahi would have to be the lift-and-shift project I was involved in that included the movement of a data center from one European country to another!